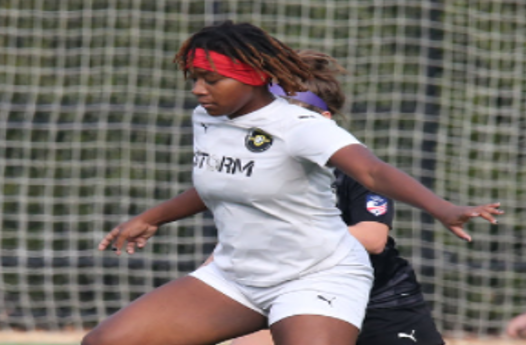 She is a physically strong defender who tackles extremely well. As an outside back, she covers her winger exceptionally well, which allows the winger to press higher and press the attack much more.  She is very strong technically, which allows her to play into midfield to jumpstart the attack many times.  Her individual defending is very consistent, as she constantly dispossesses her opponents.

A strong 1v1 defender, she is a great presence at center back. Her ability to cover for the outside back down her side allows for the team to open up much wider and spread out in the attack. She is strong in the air and can keep the striker(s) pinned with their back to goal often. When she wins the ball, she is able to play longer, driven passes to the wingers as well as accurately find her midfielders to spring counter attacks. Physically, she is very strong, so she is able to negate an opponent’s aerial ability on set plays.

She is an extremely technical player that any team will want on the ball as often as she can touch it. She covers a large amount of ground in the midfield, which is one of her best strengths. As the attacking midfielder, she provides great creativity by her ability to drive past players as well as play inch-perfect balls to the front players. She’s very strong in the air with the ability to score on set plays. She is a versatile player, so while her strongest position is in the middle of the park, she can easily play up front or out wide.

She is a very quick and agile player that can play either right back or left back. She covers the ground very easily, which allows her to support the attack often overlapping her side’s winger. Especially down the right side, she is able to get forward and provide crossing opportunities. Technically, she takes care of the ball with consistent passing and has good crossing ability. She often dispossesses her opponent, and she is able to quickly play into midfield when she does because she has great awareness and quick decision-making ability.

A very quick and strong center forward with pace to get in behind, she is a great threat to score goals, having led the line for her high school every year. Her movement off the ball allows her to make great penetrating runs behind opposition defenses, and her 1v1 finishing is very clinical. She links up with her attacking midfielders and wingers very easily. She is a very tenacious player, as she constantly troubles the opposition defense by never stopping always playing with grit.

Kayla is a very strong player to lead the line, as she links up play exceptionally well with her team, especially the midfield. She holds the ball well, which allows her teammates to join the attack, which is an invaluable tool as a striker. Her finishing ability is very crisp, especially getting on the end of crosses in the box. Any team would benefit from having her lead the line. She can score goals, link with her midfield, as well as defend with a great amount of effort, allowing her team to press from the front.